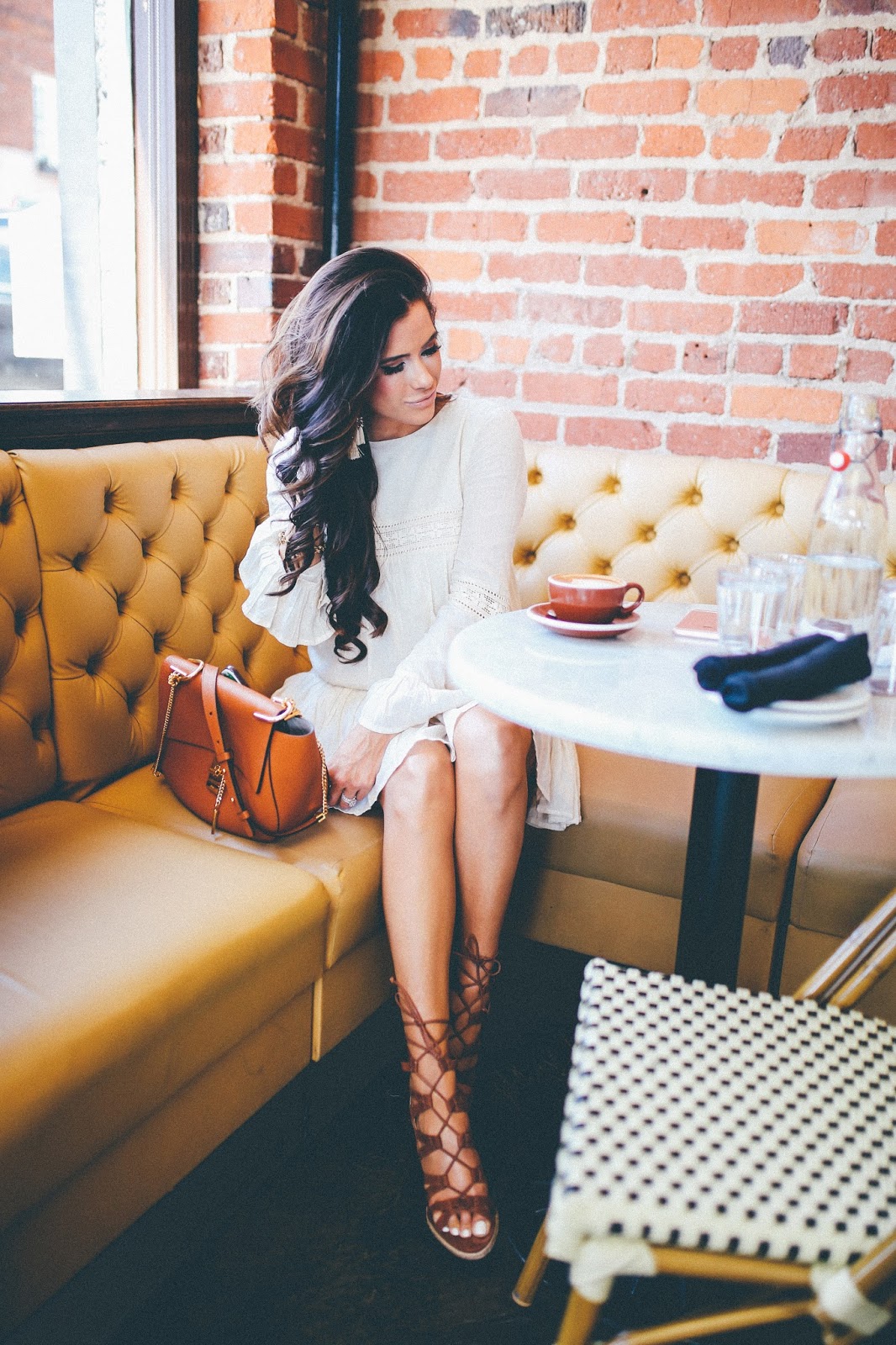 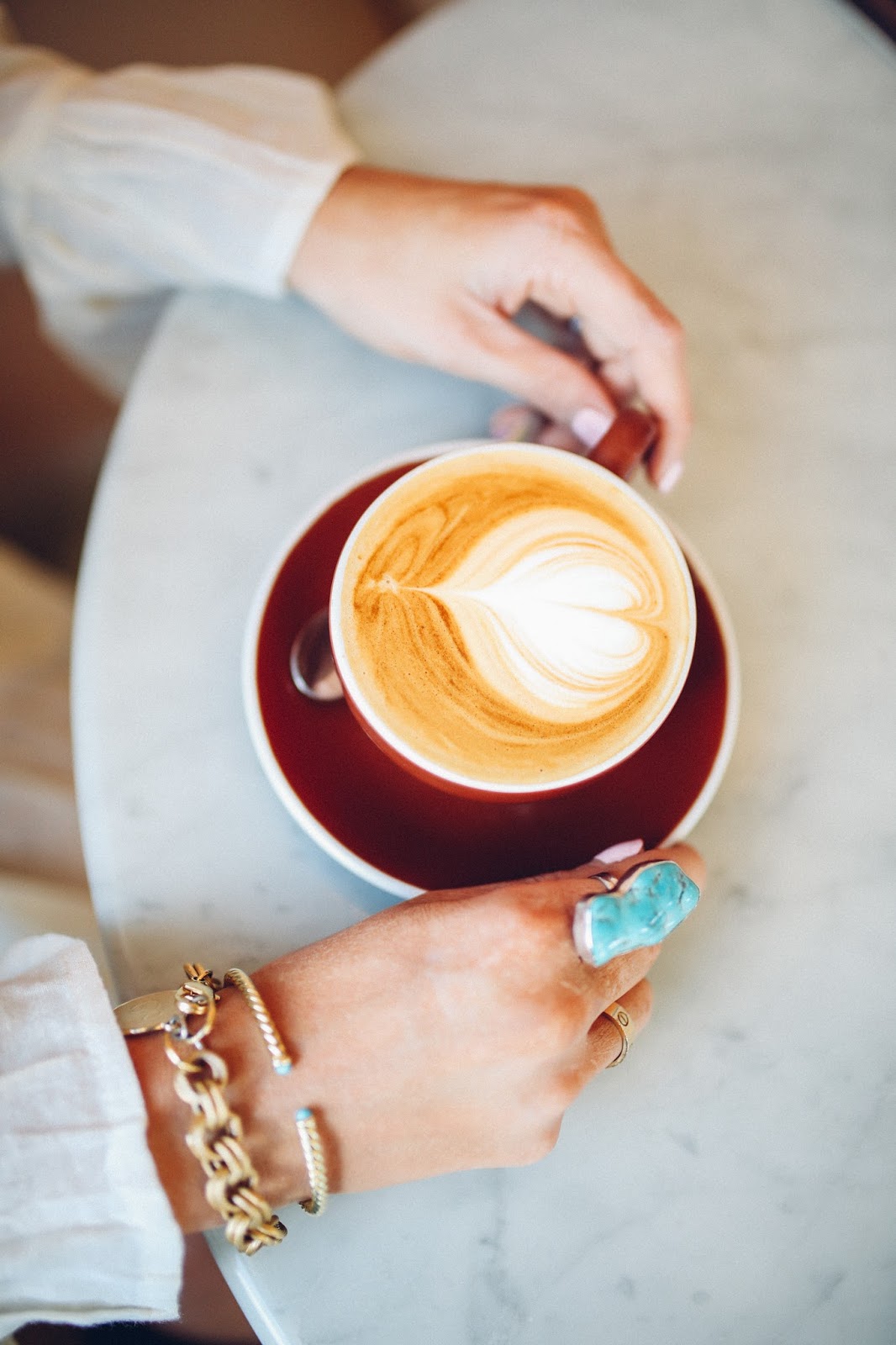 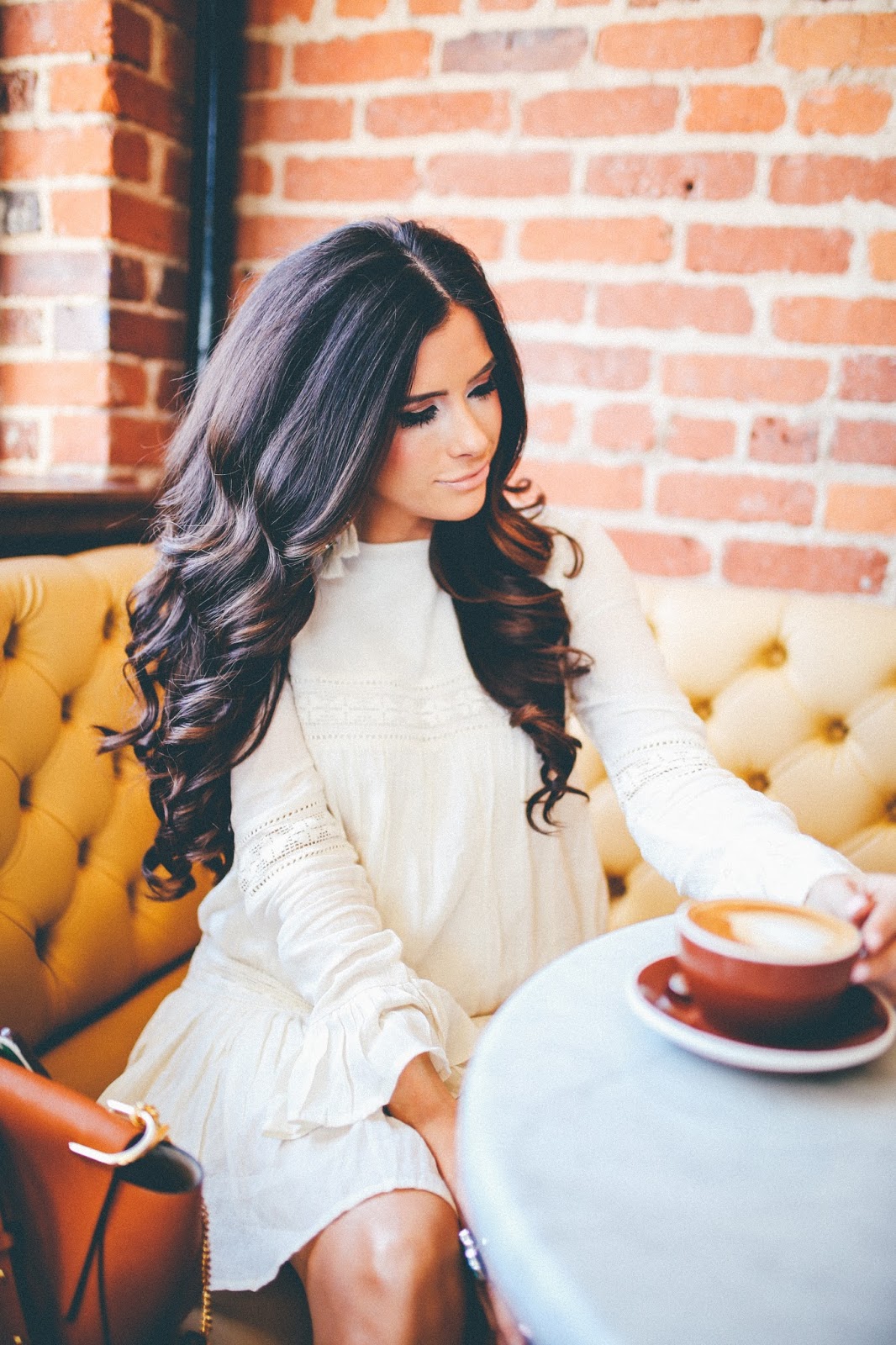 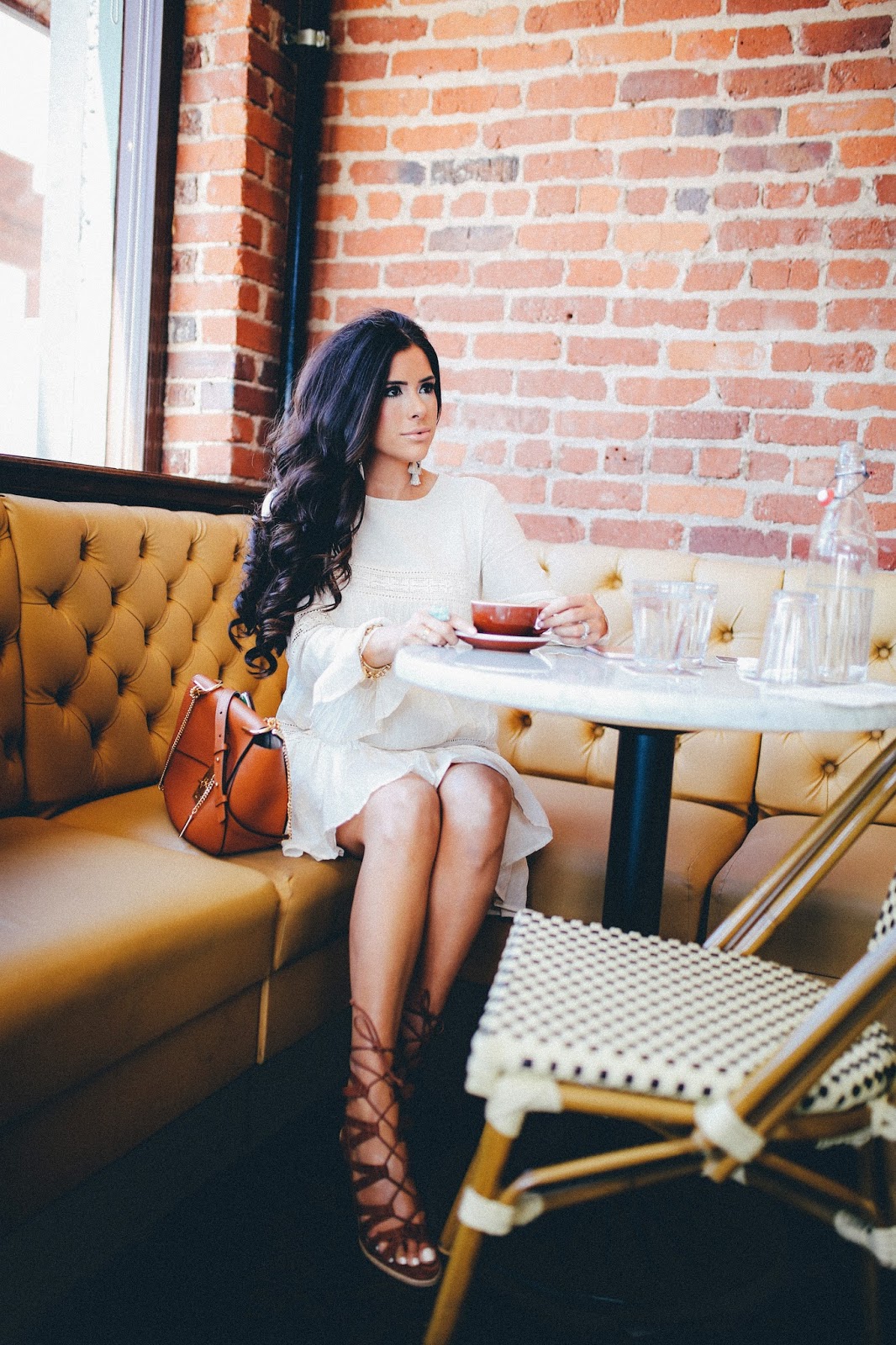 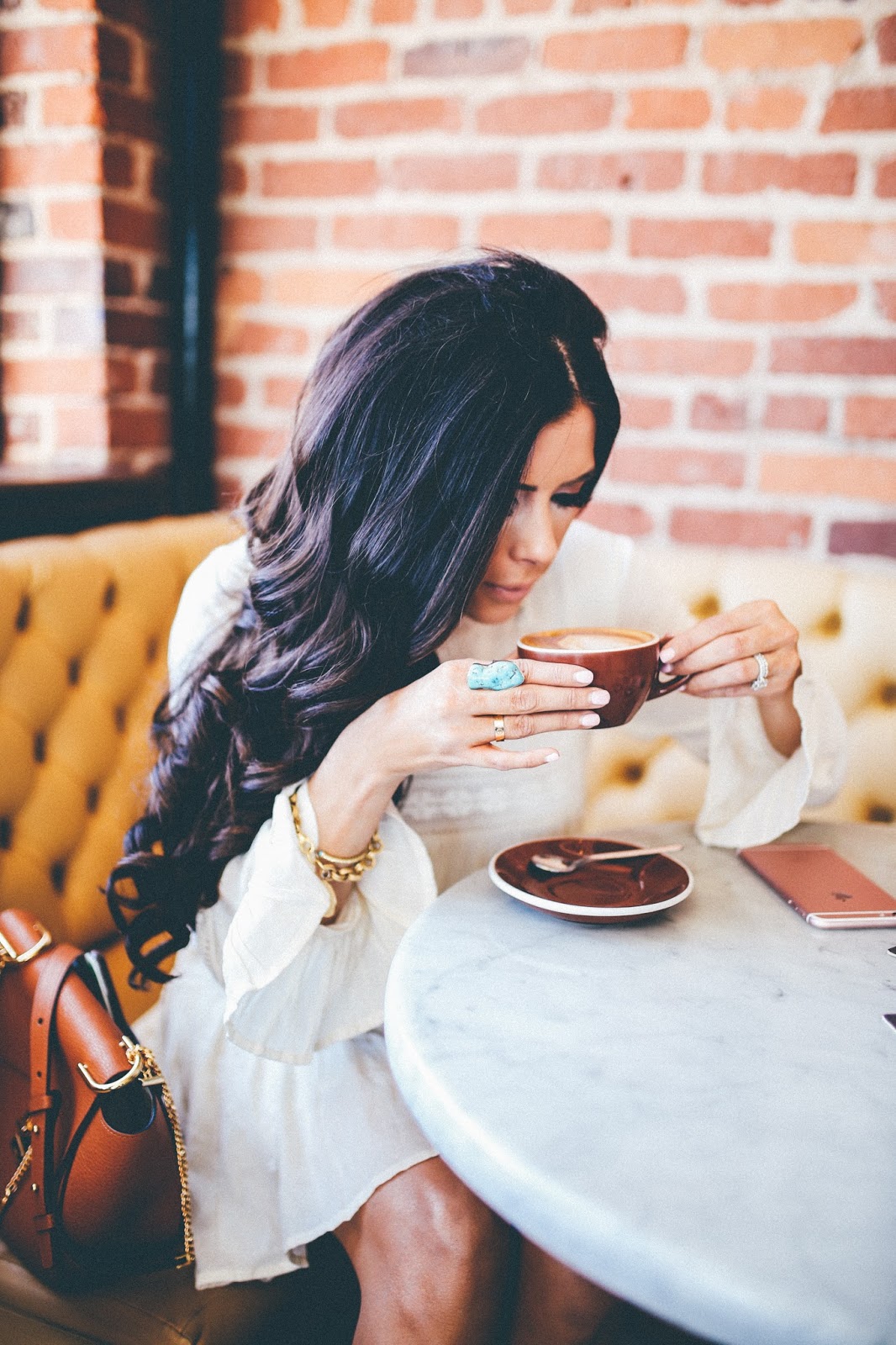 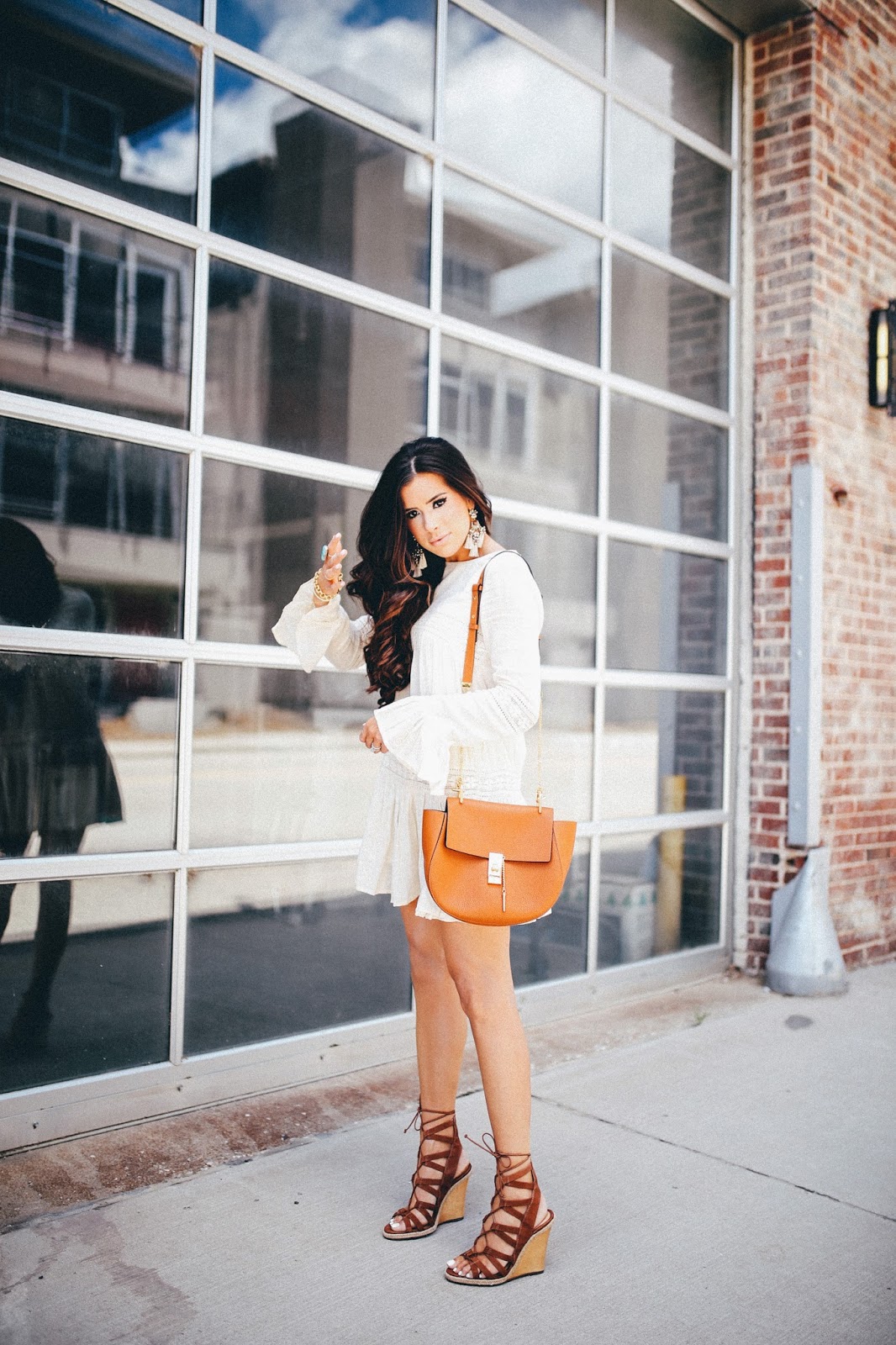 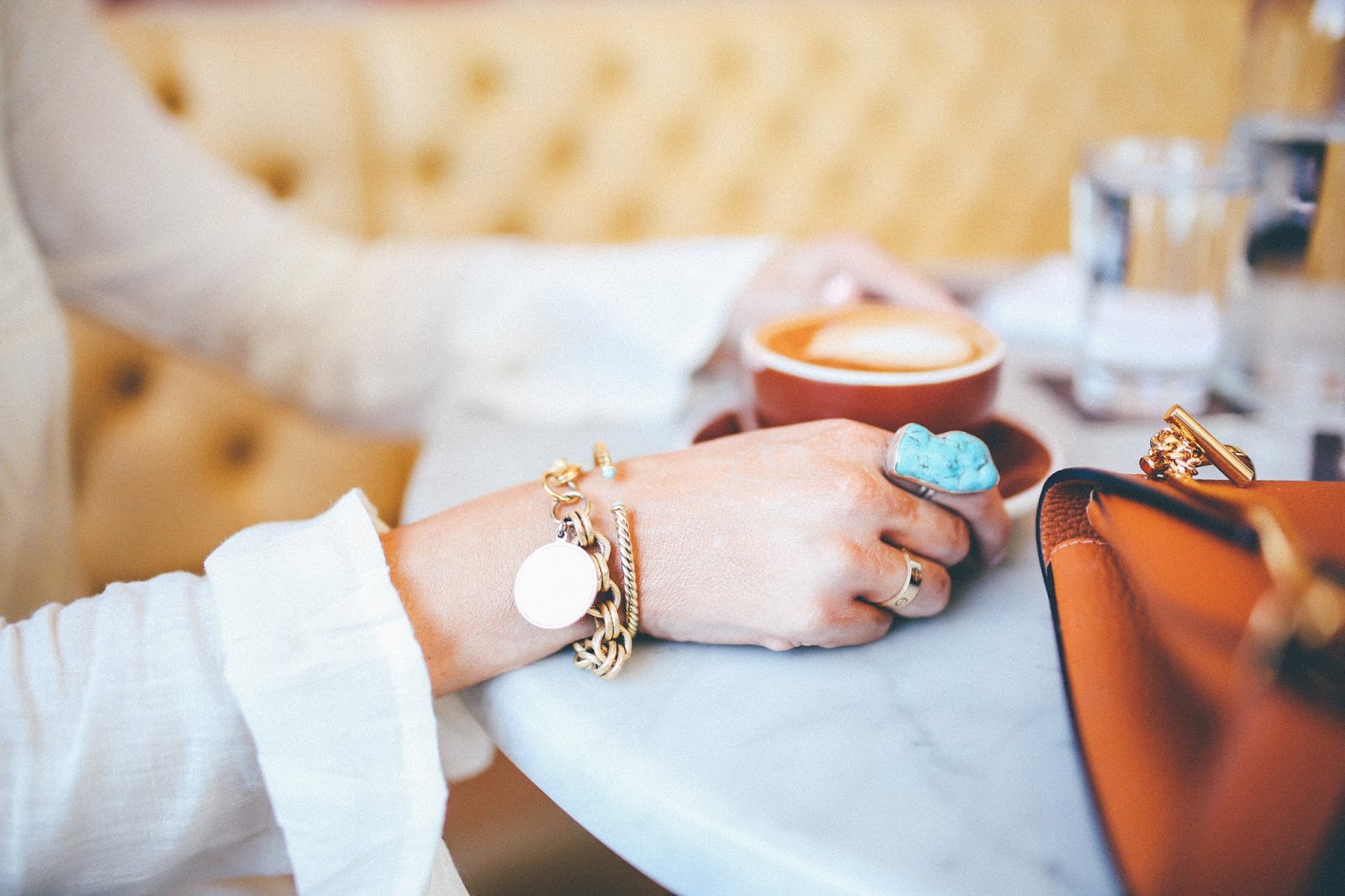 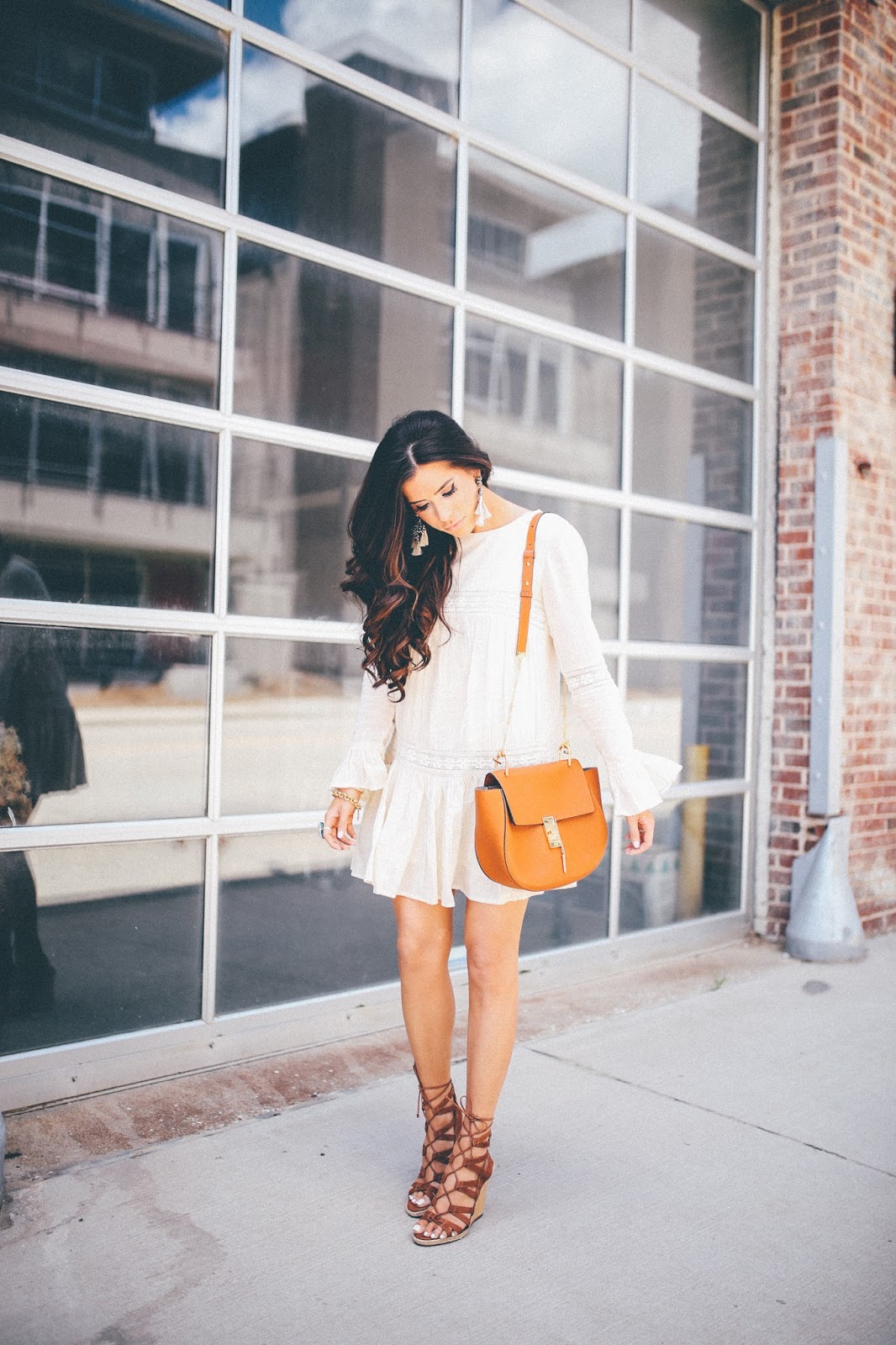 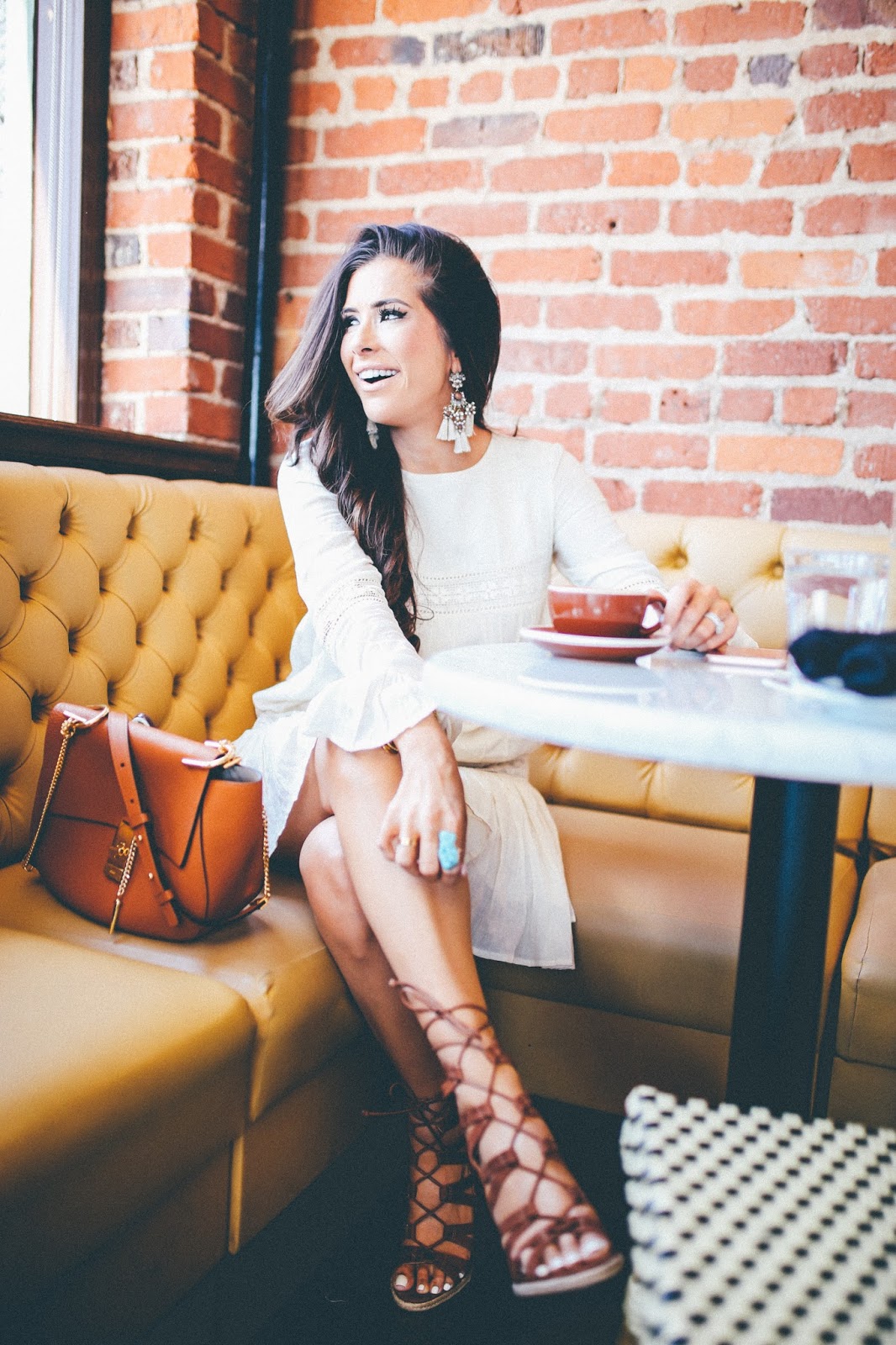 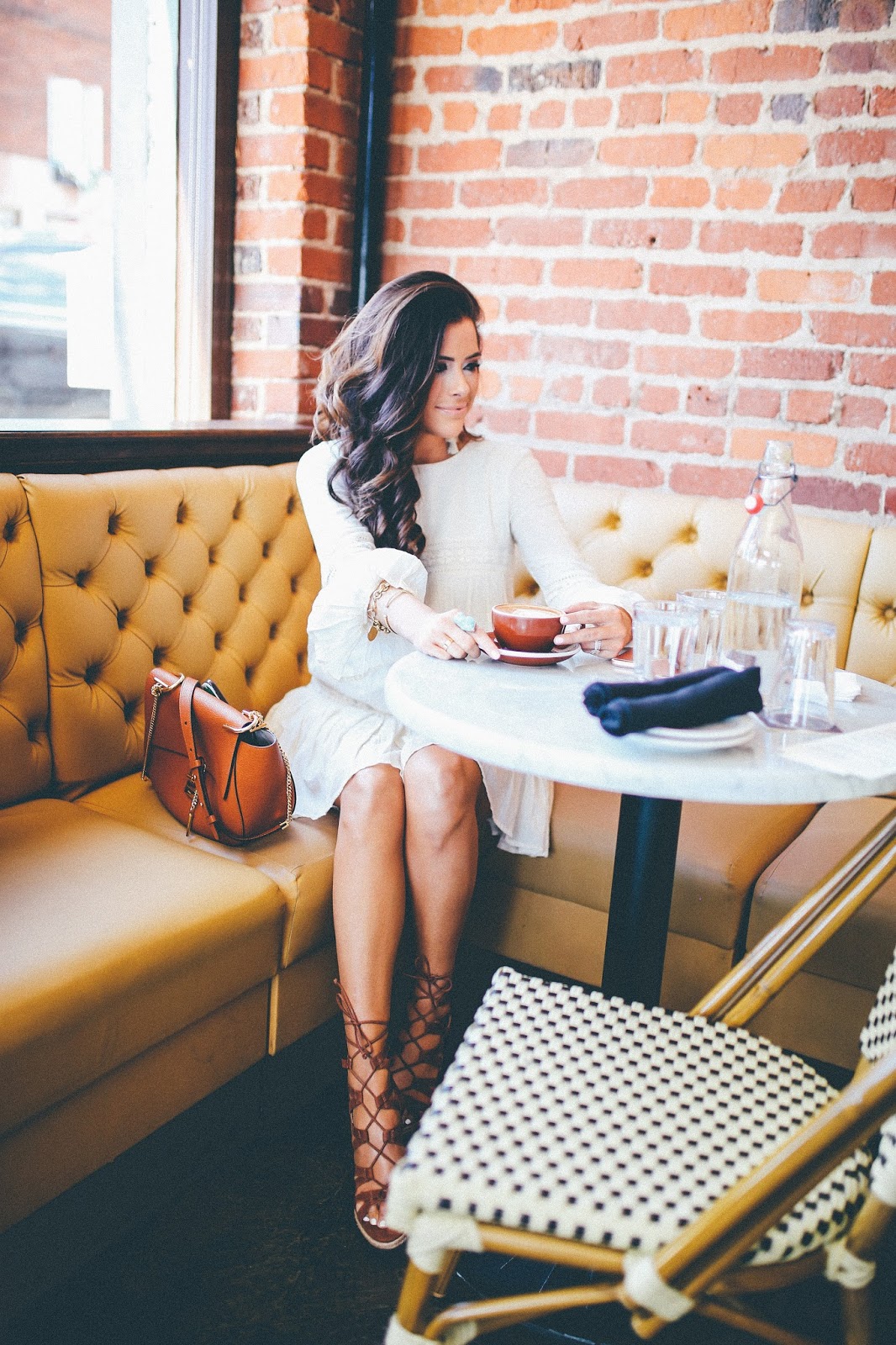 DRESS: Tularosa | WEDGES: Schutz (similar under $100 here) | BAG: Chloe (similar style) | EARRINGS: BaubleBar c/o | RINGS: Cartier, Natalie B | BRACELET: David Yurman | LIPS: Whirl, Nude #1, Undressed
John and I had such a fun weekend. He’s on a rotation where he has Saturday and Sunday off (praise the Lord!) and  we spent almost all weekend enjoying the outdoors. We snapped these photos yesterday after church – we went to grab brunch at a coffee shop called Hodges Bend here in Tulsa. John’s not a coffee drinker but he likes anything chocolate sooooo I got a latte and we split french toast covered in strawberries (lol no pix be we were starving!).
I’m going to Arkansas to see my mom today – she had a biking accident over the weekend. She and my dad go biking several times a week, they are in way better shape than John & me.. :/ They wear all the gear including those dangerous things that connect your shoes to your pedals (I don’t know the terms!). Anyway, she fell going around a curve on a trail &ended up fracturing 3 different bones in her arm & shoulder! I don’t think she could get her foot loose in time to catch herself, poor thing. Speaking of bikes – my Zumba class was cancelled last week so I tried Spin and holy cow! Let’s just say it was a good thing the lights were off bc I would have been so embarrassed. I’m wanting to keep trying so maybe I’ll get better?! Any of you do spin? I mean… I’ll take any tips!

This site uses Akismet to reduce spam. Learn how your comment data is processed.

What I Packed For Las Vegas

I received a few questions asking for recommendations on what to…

Be a part of my e-mail list where you get early and exclusive access to my Amazon hauls, beauty reviews, new purchases, and more! I send out reader exclusive e-mails usually once a week so that you all can shop my favorites before they sell out!